'Arise'
​(The Story of the First Butterflies) 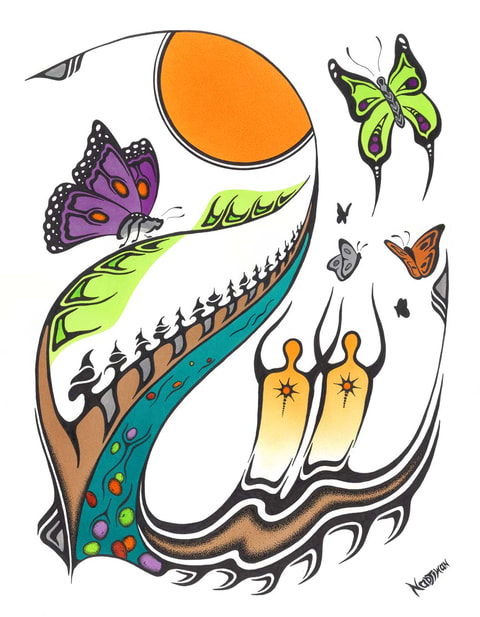 Arise
In the long-ago time, the first humans to come to the world were a set of infant twins. All the creatures of Mother Earth resolved to take very good care of this precious gift; each creature providing according to their own particular skills as caregivers. Wolf hunted, otter fished, deer collected plants, bear fetched berries, and the birds gathered materials to keep the twins warm and sang them lullabies. In time, the animals realized that the twins were not yet walking. There was no need for them to do so since they were so well cared for. So, the animals summoned Nanabozho and explained their dilemma. He promised to travel to the distant lands of the west to petition the Great Spirit to find out what could be done. Upon arriving there and explaining the predicament, Nanabozho then went to sit next to a clear blue stream to await an answer. Looking into the water, he noticed the most brilliantly coloured stones. He began to throw handfuls of them up into the sunlight and was amazed by how they sparkled. Then, on his seventh toss, the stones did not fall back to earth. Instead, he saw that they had turned into many beautiful and delicate winged creatures that seemed to dance just beyond his reach – the first butterflies!, or “memengwaa” to the Anishnabek. He set about capturing as many as he could and returned to the east where the animals awaited. Setting the butterflies free just above the twins, they were dazzled and instinctively started to grasp for them. But failing to catch them, they started to sit upright. Still not high enough, the twins then began to stand, and then walk, and eventually run!

​More than just a tale about the first butterflies, this story, with its culmination in the act of raising oneself up, can offer a far more compelling teaching about the urgency of our being upright in our conduct, and of elevating our intellectual, moral and spiritual faculties. Only by awakening to our higher and nobler natures can we effectively guard against those pernicious elements threatening our very existence. These would include the currently pervasive blights of rampant disinformation, a distrust of science (especially health and climate sciences), and conspiratorial thinking – jeopardizing not only our democratic achievements and aspirations, but our very humanity. So let us reach for the brilliance of the dancing butterflies, though it may seem to be just beyond our reach, and remember that ultimately, their brilliance is our own. Indeed, let us Arise!