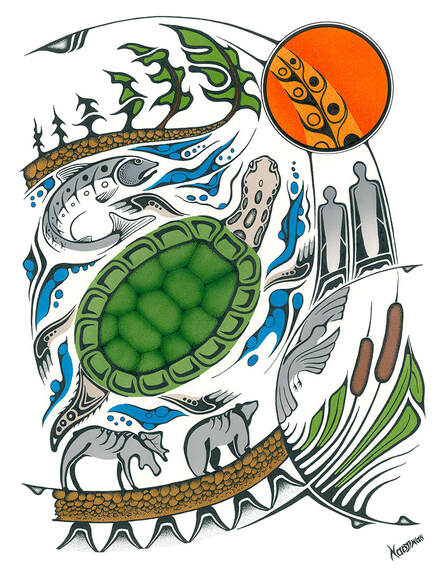 Emissary
Among the principle Dodems (clans) of the Anishnabek are the members of the Fish Clan, who are said to be teachers possessing knowledge of the world that needs to be imparted to others. However, as fish are relegated to the realms of water, they are in need of one who can carry their teachings to others. This special role falls to Turtle (Makkinak), chief figure among the fish clans, who is able to dwell both below the waters and upon the land. As such, Turtle is said to be a communicator, possessing the ability to speak the languages of all beings who dwell upon Mother Earth -- those of the waters, land and air -- and therefore acts as an emissary for all.
​
In this piece, one can see the prominence of Turtle setting out into the world to relay the important knowledge as imparted by all those gathered around her, to we human beings, rendered on the right. The prospect of Turtle as a ‘communicator’ strikes a paradoxical tone given that they do not produce readily audible sounds, and who, given the apparent absence of ears, were once thought by early science to be deaf. However, later science has been able to determine that their ears are, in fact, internal. In other words, it is this subtle yet vital internal mechanism that helps them understand and navigate the external world. This characteristic only heightens the importance of Turtle’s symbol for humanity, demonstrating the importance of the unseen, as the deepest truths about ourselves and our world are discerned through our internal, many would say “spiritual,” faculties. And have not the events of 2020 presented humanity with an urgent call to listen more deeply to those beings with whom we share this planet, in order to understand our responsibility in ensuring the health and well-being of our precious home!
Some additional thoughts on clans, culture...and pandemics:
“Emissary” began two years ago and the events around its unfolding are imbued with personal meaning, but also have broader ramifications for us all. First, the personal…

It was in 2018 that I first decided it was time create a turtle drawing. I struggled to achieve a design that I liked and decided to put if off for a year, only to have my 2019 attempt also hit a creative block. I was somewhat troubled by this, and for a particular reason. Among my people, the Anishnabek, I was Turtle Clan, “So why?!” I fretted, was I having so much trouble hearing what it was that ‘Turtle’ was trying to say to me about how I should render him/her? The answer to that came in the late spring of 2019. Since my “return” to the true ancestral home of my Anishnabek family on the Saugeen (Bruce) Peninsula in 2017, I have been fortunate in that I can now more easily see and speak with those who have never left these lands, and who know our family histories intimately. And so, it came to pass that when our clanship came up in conversation with a local elder, it was explained to me how a chance encounter with someone from away, many years ago, led one particular branch of my family to believe we were Turtle Clan. It is not important to relate the details of that encounter here, but suffice it to say, the Nadjiwans (or Nadjiwons) are not Turtle Clan. This has since been confirmed by other members of the family who continue to reside at Neyaashiinigmiing, and this would include my late Great Auntie Verna (who was “great” in so many ways!), who also knew the truth of our clanship. We are, in fact, Ajijakk Dodem, Crane Clan.

Though I did not relate it to the person with whom I was speaking at the time, this was a real revelation to me and had a significant bearing on a particular event in my life, specifically my “artistic” life. I began drawing with pen and ink as an adolescent. My very first Indigenous art piece, done in India ink, was completed in 1986 when I was only 17 years old. It was called “Eloquence for Leadership,” and it was of…a crane! Why did I do a crane? At that the time the reason seemed simple: I thought a bird would be a pleasure to draw…and I still feel that way about birds. And why that title? Cranes are one of two “chieftain” clans among the Anishnabek (the other being Loon Clan) so they are leaders. Knowing what I do now I can say with a deep certainty that that story is an excellent example of the “spirits,” as we say, knowing what is true about us often long before we do! As an aside, while that early piece is long since gone from my life, I would like for it to find its way back to me.

The truth is I had become quite comfortable in my life as a “Turtle.” As you’ve just read above, Turtle is a communicator. And I have certainly been a “communicator” throughout my life. Unquestionably in my life as a visual artist, but also in my academic achievements over the course of my university degrees and the copious amount of writing that endeavour entailed. I would also go on to spend many years as an Indigenous Advisor for a federal agency…a “communications” officer, in essence. In that position I very often, like Turtle, had to speak many “languages” depending on my audience. Government bureaucrats; federal or provincial politicians; academics; First Nations Chiefs; Elders; and urban Indigenous policy makers or advocates. Engagement with any one of these groups or individuals required its own lexicon and/or communication protocols. So there had most certainly been gratitude for the “gifts” of Turtle during that time.

But I began to learn some time ago that being an effective communicator came with as many risks as rewards. The perception of simple truths, coupled with an ability to impart them effectively, can often be deemed as threatening to those unwilling or unable to “hear” them. This has proven to be the case at times in both my personal and professional life. And this is where the proper return of Crane in my life has offered me more insight and understanding. Among our two chieftain clans, there are specific roles for each. The Loon Chiefs are tasked with communication inside the community, but the Crane Chiefs are tasked with communicating with those outside of our communities, on behalf of our People. This latter role can be an especially risky one. It often requires that our Indigenous values and interests be understood and honoured by those among the new people of these lands, but sadly, all too often that favourable end remains as something aspired to rather than achieved. So it went for my aforementioned career in the federal government. When serious missteps were taken in my particular program I quickly became a strong and consistent voice of protest amongst my Indigenous colleagues in the conflict with our non-Indigenous management. Though change came, the cost was high and eventually led to my decision to bring that particular part of my life to an end. But now I can understand and accept it more readily as an occupational hazard of being a Crane! Today, I hope that as an Indigenous visual artist that my “communication” with the non-Indigenous community attains more fruitful outcomes through my images and their accompanying stories.
​
Let us return, though, to Turtle the “Emissary” and the wider implications for all of us. While I could say that my early struggles with a turtle drawing and story were on account of waiting for a communication from a clan animal that I erroneously believed was mine, I understand now that it is more accurate to say that Turtle was “waiting” for this particular time and the event that has beset humanity. As you will have noticed in the story above, I have already alluded to this. The very conversation that is now happening across many disciplines, spanning the globe, is that the time for us to radically re-envisage our relationship to other beings on the planet is NOW. The pandemic, being zoonotic in origin, clearly establishes that our current relationship to the environment generally, but our treatment of animals specifically, undermines both the dignity and welfare of humans and non-humans alike. “Zoonotic,” the term used to identify animal diseases that can be transmitted to humans (like the current coronavirus), is a  term that has infiltrated our daily lives, like many other terms/phrases…”flattening the curve,” “epidemiology,” “modelling,” “physical distancing,” etc. It is well and good that we undergo this education, and to be both sure and clear, the modern sciences and robust public health measures will play pivotal roles in remedying this dire situation. But while the virus attacks the body, and though we can be confident of its ultimate defeat, we must not forget that the antidote for the deeper malaise afflicting human hearts and minds will not be found in a vial, under a microscope, or at the at the point of a syringe. As with the message that accompanied last year’s drawing, New Myth for a New Earth, the real transformation and healing that must happen is ultimately cultural and spiritual. And as for the new “story” that must emerge, we will look to our visionaries, philosophers, poets, and artists of all mediums to both interpret and give voice to our current predicament, as well as to help us “see” a better way forward.