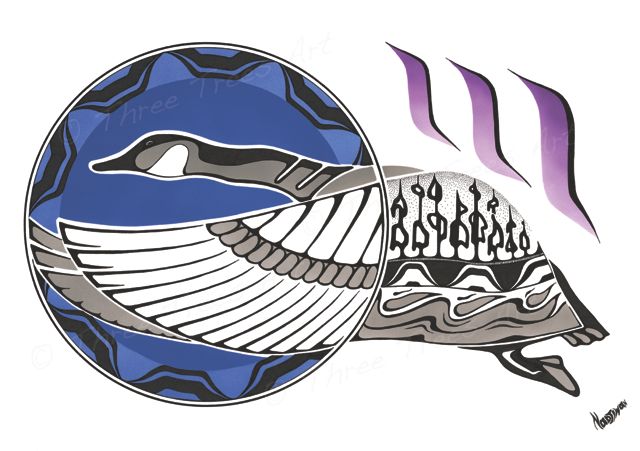 Memories of Muskego
While spending time along the James Bay Coast, Mark was deeply touched by his time up in “Muskego” (as it is known to the Cree) and decided to do a tribute piece to this special frontier land. To accomplish this, he incorporated a few of the elements that are emblematic of the region. In the picture, one’s immediate attention is drawn to the Canada Goose in full flight across the face of the moon. Its prominence in the picture reflects its prominence in the summer skies of Muskego and in the lives of the Cree since time immemorial. In the back of the goose’s wing, one sees rendered the flowing dark waters of Muskego’s rivers banked by the ever-present forests of black spruce. Above them, the northern lights dance. There is, though, a larger tribute here and it is to one who had the good fortune to grow up along this Arctic Coast, Mark’s wife Patricia. This piece is dedicated to her.