'New Myth for a New Earth' 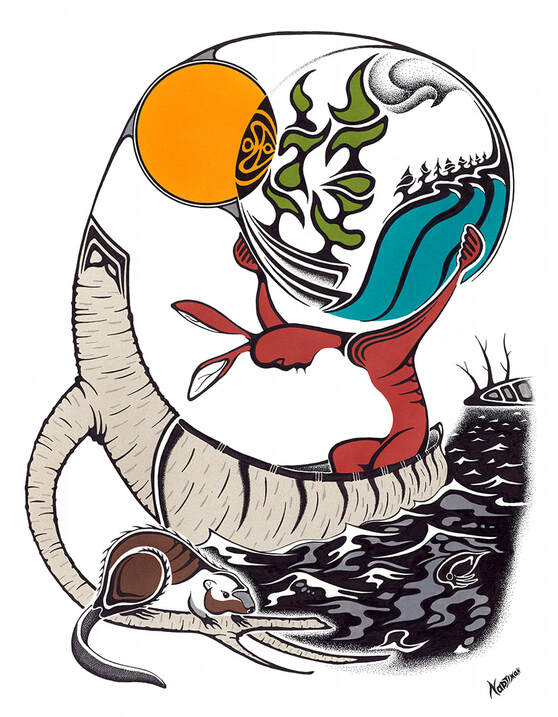 New Myth for a New Earth
​This new telling of the ancient flood/creation story of the Anishinabek features the two principle characters from the original myth: Muskrat (Wazhashk) and Nanabozhoo -- the great cultural hero. Nanabozhoo is rendered here in his persona as the Great Hare – hence his large ears! In the original myth, the world is flooded by the Great Spirit who has become disillusioned with The People who have gone astray. Nanabozhoo and Muskrat are afloat on a log when suddenly Muskrat dives into the depths to retrieve some earth from the bottom. He succeeds in bringing back a small amount of dirt from which he and Nanabozhoo are able to re-create the world anew.

​In the “new” or modern telling, the floodwaters on which these two are adrift is the man-made flood of chemicals that are suffocating and destroying the environment. This is represented by the dark and turbulent waters as well as the dead, barren landscape to the right of Nanabozhoo. Using the various cultural tools available to him, along with the modern sciences, Nanabozhoo once again re-creates the world and holds this “New Earth” above him. We can see the restoration of health and goodness by way of the green of the land and clean blue waters. The modern sciences are represented through the inclusion of both the birch tree and the water flea (Daphnia). Can you find Daphnia?! Each of these organisms function as the “canary in the coal mine,” as the quality of their health provides us with important clues about the health of the terrestrial and aquatic ecosystems. The canoe, in this modern telling, represents the cultural retrieval that Nanabozhoo undertakes in his quest, fashioning it from the birch log on which he and Muskrat are floating. Thus, we can see how the lines of the birch tree morph into the canoe where Nanabozhoo is seated, hoisting the New Earth aloft into the sunlight.
BACKGROUND
“New Myth for a New Earth” was a commissioned work. In January 2019, I was contacted by John Colbourne, a Canadian working and living abroad. As a scientist and professor in environmental genomics at the University of Birmingham in the UK, and co-founder of Michabo Health Science (along with Professors Mark Viant and Ben Brown), he was interested in having the Indigenous origin of their chosen name, “Michabo,” given further life by way of an artistic rendering of the ancient myth and character on which it is based. Michabo, is a regional linguistic variation of “Nanabozhoo (Nanabush),” one of the principle cultural figures/heroes of the Anishinabek Nation that is located primarily in Ontario, Canada. You can see and learn more about the critical work being done by John and his colleagues through Michabo Health Science here.

I explained to John that accepting commissioned work was not my usual practice. However, as he further explained his vision and work, with its extremely important implications for environmental stewardship and rejuvenation in an ever-more polluted world, I came to have a strong sense that this was definitely something I wanted to be involved with. Though John’s scientific work lies beyond the ken of my own abilities and understanding, as an artist (i.e., an all-round ideas person) I was finally “sold” on the collaboration by one simple comment from John in an email. Though he explained the necessary role of the “modern sciences” in the important work of protecting the health of the environment, he went on to say that the primary shifts that need to happen globally “are cultural ones.”

While I certainly knew this to be true and so absolutely agreed, I found this to be very refreshing for the following reason: John has dedicated his life’s work to understanding the natural world using science (biology) while simultaneously maintaining an awareness that the real “hope” lay within the decidedly immaterial world of cultural values. After all, what intrinsic human value (love, faith, compassion, respect, etc.) has ever been reproduced in a laboratory? And yet, it is precisely these qualities that ultimately define our evolving relationships with one another and with our environment. And the outcomes, whether positive or negative, are determined by the degree to which these cultural values are present in our decision making.

Indeed, cultural values also guide the course of science itself, to either rejuvenate or devastate the earth on which we depend. And one of the most ancient repositories for cultural values is the world of Myth, because it is here that we find the vast, myriad of stories steeped in rich metaphors that have animated the spiritual traditions of all the world from time immemorial. When they are taken literally, many find that the content of the great cultural myths will chafe against our more modern inclinations toward logic and common sense. It is thus imperative that we be ever-mindful that the reality of myth lies not in literalism, but in an allegorical understanding. None have expressed it better than the great mythologist Joseph Campbell, who offered that “Myth is what never was, but always is.”

Now, returning to the need for a cultural retrieval that unites us around our shared responsibility for respecting and protecting the environment, I am reminded of Mario Molina, the Mexican-born chemist and Nobel Prize recipient for discovering the depletion of Earth’s ozone layer. He observed that “Scientists can depict the problems that will affect the environment based on available evidence, but their solution is not the responsibility of scientists, but of society as a whole.”

In an early email to John, I certainly expressed appreciation for his desire to reflect both culture and myth in the very name of his endeavor. I am now able to more publicly thank him for not only his broader, more all-encompassing vision, but for creating an opportunity for me to be a part of it. Miigwetch John!