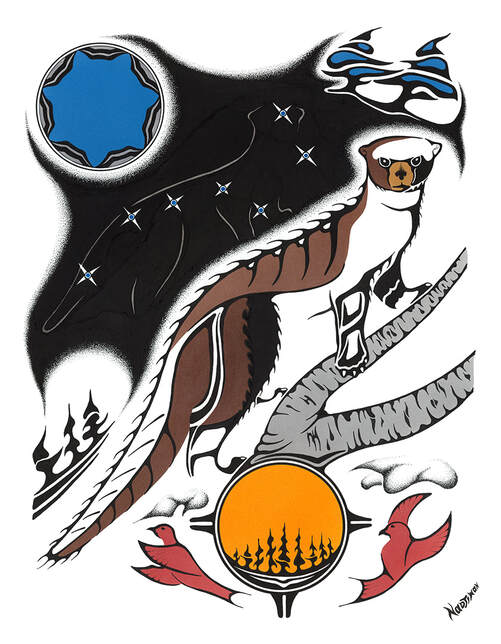 Summer Harbinger is the tale of Fisher (Odjig), the return of summer, and the origin story of the constellation known as the Big Dipper. In the long-ago time there was only winter, and the perpetual hardship of this time weighed heavily on all those who dwelt upon Mother Earth. It was discovered that the absence of summer was due to the “summer birds” being held captive in a pouch in the cabin of an old man. In a meeting of the animals, it was decided that it would be Fisher who would go and try to free the summer birds. In this piece the moon represents winter, with its cool blue light shining upon the snow-covered trees.

After a long journey to the cabin, Fisher manages to steal the pouch of summer birds while the old man is out hunting; however, the theft is quickly discovered and the old man gives chase. The pursuit is long and hard, with Fisher dodging many arrows as he tries to flee. Finally, Fisher reaches the top of the tallest tree atop the highest hill, and with nowhere left to run he takes a great leap into the sky, freeing the summer birds as he rises above the earth. Free at long last they take flight, carrying the warmth of a summer sun back to the land, as illustrated by the warm colours of summer in the bottom of the piece. It is said that Fisher’s leap was so high that he came to rest among the heavens, forming the constellation of the Fisher Star, (Odjig-anang), the Big Dipper. In the drawing, one can see his form outlining this most recognized of constellations depicted in its winter orientation. It is sometimes said that as he leapt, he was struck in the tail by an arrow from the old man’s bow, creating the “bend” that can be seen in the handle of the Big Dipper.
A Personal Reflection...

During my background research for this piece, as I began to delve into the various versions of the fisher legend among Indigenous people, there were consistent references to how Fisher ran, with great speed and exertion over large distances and all manner of terrain. As these images of Fisher’s flight occupied my mind’s eye, I could not help but be reminded of a particular “Running Fisher” I had known, a by now young man whom I have not seen for some time. If he should come across these words, I would like him to know that I have allowed for the creation of only one Artist’s Proof (AP 1/1) of this piece, from the original, and that it would be my honour to see him have it, if he should so choose.